The former site of Outdoor Traders, a popular sporting good and rental store in Greenwich, sold on January 11, 2018 for $3,500,000. The property is located at 55 Arch Street and contains 6,497 square feet, selling at approximately $538 per square foot. The sellers, Dick and Jean Hoyt, have operated the retail business since the late 1980’s and moved to the Arch Street location in 2002. Listings of the property suggest that it was available on the market for 239 days at a $4,500,000 asking price prior to being purchased. The buyer in the transaction was 55Arch, LLC.

The property is situated in a popular, high-end retail area in Greenwich. Arch Street is connected to Greenwich Avenue, a busy commercial corridor home to stores such as Saks Fifth Avenue, Apple, and Manfredi Jewels. In a survey of 93 properties along the Greenwich Avenue corridor, the current vacancy rate is 5.7% with a five year average of 6.3%. The current NNN rent per square foot is $83.84, compared to a five year average of $93.23. 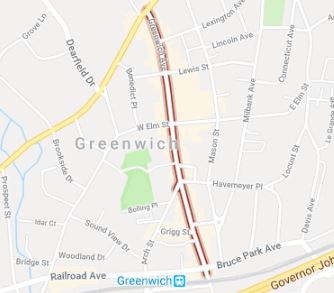 As a whole, the town of Greenwich is currently experiencing a vacancy rate of 3.6% with a five year average of 4.2%. The current NNN rent per square foot is $64.28, with a five year average of $66.11. Based on the data, it appears that Greenwich Avenue is experiencing a drop in rental rates coupled with a vacancy rate persistently higher than the town average. The town experienced a similar decrease in rental rates, notably by a smaller margin, and a declining vacancy rate.  Despite a drop in rental rates throughout Greenwich, the brick-and-mortar retail market continues to perform relatively well despite the societal shift into purchasing in the online retail marketplace.